Shouldn't have Picked A fight With Me Charles

Staff member
This would suggest that thanks to the Unions king Charles the blackmailed won't last much longer! 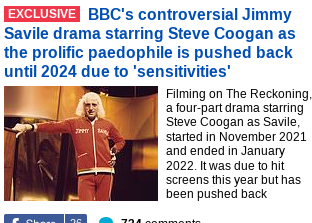 Is he just trying to hang on longer than Edward 8th so he's not the shortest reigning idiot? Main difference being that Edward was forced out because he wasn't blackmailed and decided to stand against these people, unfortunately for him the blackmailers then as now controlled America. George 6 Elizabeth's husband and it would seem Charles 3 are ALL blackmailed (pervs) by these people! It HAS to end both here AND in America.

You can argue that the Unions are only striking because of inflation not because of me but who caused all this inflation? Strictly speaking it is Charles's evil blackmailers who deliberately introduced several strains of COVID (since 2016) in a futile bid to take me out under the rules of engagement that (I presume) bars them from unlawfully killing me, they got away with it until 2019 until I inevitably passed it on.. It's a rule that does not extend to the attempted murderers in Ireland. However it is my tenacity not to let these people defeat me, my immune systems ability to fight off different strains of COVID and my ability to work out what the rules of engagement are that has got us to this situation and the sort of inflation to bring down a blackmailed monarch!
Last edited: Nov 11, 2022
You must log in or register to reply here.
Share:
Facebook Twitter Reddit Pinterest Tumblr WhatsApp Email Share Link
Menu
Log in
Register
Install the app
Top