Says It With A Straight Face

Staff member
You and us are the Autocratic Power MissTrussT, you or your party have never been democratically elected, your party is in power thanks to Autocratic National Security Powers due to a dangerously blackmailed Monarchy and you are only elected by a rigged internal vote by the Tory Party.

We have more than enough problems here without you starting potentially Nuclear conflict (without a democratic mandate) against Russia and now China on behalf of your bent on world domination at any cost Pro Israeli blackmailers!!! 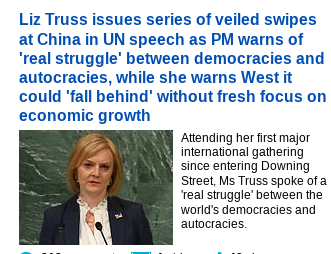