Staff member
There is an old saying that your enemy's enemy is your friend! I have been holding back comment on the Prince Harry saga until I could work out what his game really is and I have concluded that this is just another one of those Racism entrapment games. all be it an elaborate one. I will judge you (and your wife) Harry on your characters and NOT your skin colours! In fact, I would be more likely to judge your wife on the colour of her jacket than the colour of her skin Harry (don't think I didn't notice)! If you are looking for a racist Sir, I suggest you look a bit closer to home.

The big clue came in his interview last night, if Harry is denying that senior Royals (his Father and/or grandfather) are being blackmailed over alleged sex crimes (and used against me), then he can NOT possibly be a friend or ally of mine. I also disagree with his assertion that Prince Andrew has anything to be ashamed of, especially as he (Harry) was doing similar things (Stallion) as a young man! 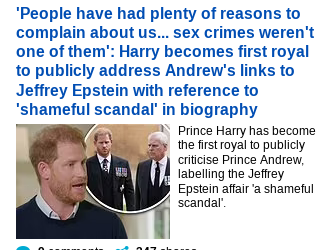