Staff member
I said I would stay silent about truss until after she assumes power but this has convinced me that the Status Quo will just continue under her. The problem of Ukraine lies not in Ukraine but in Kaliningrad (West Prussia) a German enclave that Russia occupied at the end of WW2, it is in the heart of Europe and Russia has Nuclear missiles there that are a stones throw from mainland Europe AND the UK. They HAVE to go and presumably as soon as the UK is in a non blackmailed state, these missiles WILL be removed by peaceful OR aggressive means. The only bargaining chip that I guess we have is to do a deal over Crimea and Eastern Ukraine in return for a return of sovereignty to West Prussia. Of course the Ukranian's backed by Zelenskky (or something) have other ideas and appear to be trying to take Crimea by force with (shameful) help from the UK & US so a deal can't be done, this is NOT in Britain's or Europe's best interest. We have to do a deal with Russia, get our security back (kaliningrad missiles) and get back to buying fuel from Russia. Everything that is happening is in the blackmailers best interests NOT Britain's and this has convinced me that Truss will be Zelenskky's new best friend. 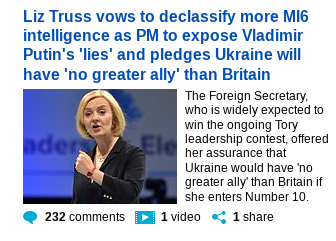