I told You So

Staff member
If I wasn't a political Prisoner, maybe I could have been a politician. I have been saying for ages that it is crazy that (in my Country) unqualified and unelected politicians are encouraging people with glitzy adverts and huge tax breaks to go out and buy an electric car on the stupid assertion that electricity is green? No it's not! Domestic electricity is about four times more expensive than domestic gas for a reason, it has to be generated and with the exception of the fraction generated by wind (if it's windy) most is generated by dangerous but finite Nuclear fuel and inefficient coal and gas power stations. It's crazy politics and a very poor understanding of physics and economics! 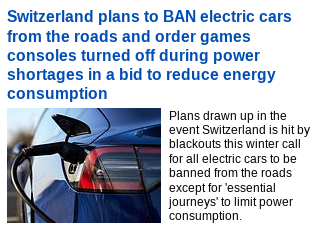