You may not have heard of me, that's because only non western state prisoners get talked about. Find out how Prince Charles is being blackmailed and used against me and how the non blackmailed Royals are using me and the blackmail situation to 'fix' elections and referendums. Did the Tories really win all those Labour seats? Did vote leave really win the EU Referendum? Did Salmond really lose the independence referendum?

You are using an out of date browser. It may not display this or other websites correctly.
You should upgrade or use an alternative browser. 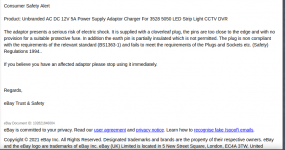 It is almost as if they are no longer allowed to try and murder me by electrocution! I mean no one would insulate the earth terminal unless they had electrocution in mind, think about it?...and the power supply itself is 100% metal so if it became live with no earth or fuse???

I bought this about 8 months ago to power my pre-amp. Actually, the strange looking plug did not meet my exacting audio requirements and got replaced before use. (did they forget that I am an electrician?) I since got a lead/acid battery which is superior for audio and only use that supply for recharging.


Actually my so called father has been doing this sort of stuff for years. He (presumably) used to wire his sink to the mains after disconnecting the earth so that when I go to switch the tap on I would get electrocuted, or so he thought. I have reactions like a fighter pilot and recoiled quicker than Theresa May could accept a corrupt promotion. When I insisted that I investigate, my father would refuse saying he will get a professional in. Of course I am saying this with hindsight, I never suspected at the time that anyone would deliberately do such a thing, let alone my own father! Oh yes and the gas oven that used to explode when I opened the door after being instructed to do so by my parents (as a child) to check if the cake is ready!

They never thought that through either, if the oven space is full of gas there is no room for air and gas can not combust without air (oxygen) so when I opened the oven door (which presumably caused a spark) instead of a fatal explosion, I just got a burned face as the gas started mixing with air as it exited the oven. Still evil bastards, I have had this ALL my life and it is still happening!
Last edited: Jul 15, 2021
F

Staff member
However they certainly do still have the authority to pre-poison my food with their porton down crap.