The Truth At Last

Staff member
...well some of it at least, have I not been saying all along that Charles was smearing Princess Diana by saying she had mental health issues so that if she blabbed about his blackmail, they would just say don't believe her she is nuts and it's straight out of the ultimate bully's handbook! In the end they found a better way to silence her. I tell you this blackmailed Monarch has to go SOONER rather than later or Zelensky (or something) WILL get his way and WW3, he (Zelensky) is STILL saying Russia fired the missile despite Western Countries saying it was HIM! 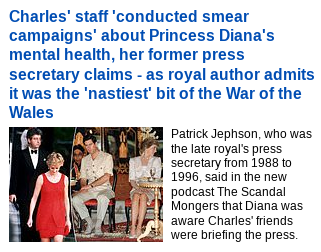