You may not have heard of me, that's because only non western state prisoners get talked about. Find out how Prince Philip and ultimately the Queen is being blackmailed and used against me and how the non blackmailed Royals are using me and the blackmail situation to 'fix' elections and referendums. Did the Tories really win all those Labour seats? Did vote leave really win the EU Referendum? Did Salmond really lose the independence referendum?

You are using an out of date browser. It may not display this or other websites correctly.
You should upgrade or use an alternative browser.

I Can See The Picture Now

Staff member
I have been having a hard time understanding this Ukraine war given that there are Pro Israeli actors on both sides. Was that Russian Hitler crap aimed at me? Hoping I would do some research into Hitler so they can twist the truth. I already know all I need to know about him. Anyway it's been a bit like doing a jigsaw puzzle without the picture to help you, then today the EU (not Britain) announced it was going to stop importing all Russian fuel by the end of the year.

Is MY idea about doing a deal over East Prussia (Kaliningrad) going to come into play next year? You can't play hard ball with Russia if you depend on them for fuel. Previously I said there will need to be negotiations with Russia, probably involving Crimea and parts of Ukraine in return for returning East Prussia to it's rightful owner and all this fighting (presumably) is to ensure each side has a better bargaining position? At the end of the day, Europe can NOT tolerate Nuclear missiles on that location and previously I said there will be no peace in the EU barnyard until they are removed, preferably by peaceful means but you know, they have to go. It is akin to the Cuba missile crisis of the 60's.

Staff member
Also about the same time as the Hitler crap Russia released this graphic about detonating a Nuclear bomb in the Atlantic. I am imprisoned (roughly) in the red dot as well Putin knows it! 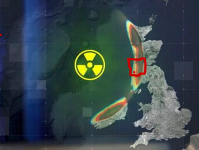