Staff member
No one is saying that everything this guy says should be believed or indeed everything that I say should be believed but if he (or I) are not allowed to speak, then powerful people really will be able to mount a 'conspiracy theorist' defence to their crimes!
As someone who actually is a victim of persecution by powerful people, I will say what I think about each of these incidents.

No one can deny that Dando's death is suspicious and the fact there has been no one (legitimately) brought to Justice over it, breeds suspicion especially as she was a confidant of Princess Diana adds to the suspicion.

As for that child, again no one has been brought to Justice which is a travesty!

9.11 I believe the intelligence services have legitimate questions to answer about what they knew prior to that atrocity? If they knew nothing, then why not?

I have no information about Manchester or Jo Cox as I was not only a prisoner then but in both cases I was under extreme pressure being the holder of national Security Powers being used to Fix Brexit Referendum AND to remove Theresa May's majority. The timing for both these events absolutely stinks as I have previously stated. Manchester was just days before the (fixed against May) election and Genvile Tower was days after it. Joe Cox murder happened one week before the (fixed against Cameron) Referendum!

I KNOW powerful people have blood on their hands and they MUST not be able to hide behind 'conspiracy theory' defence or quash freedom of speech.

I once complained to a police chief about his officers deliberately harassing me as I went about my lawful business and he wrote back saying there is no police 'conspiracy' against me even though I never said there was. 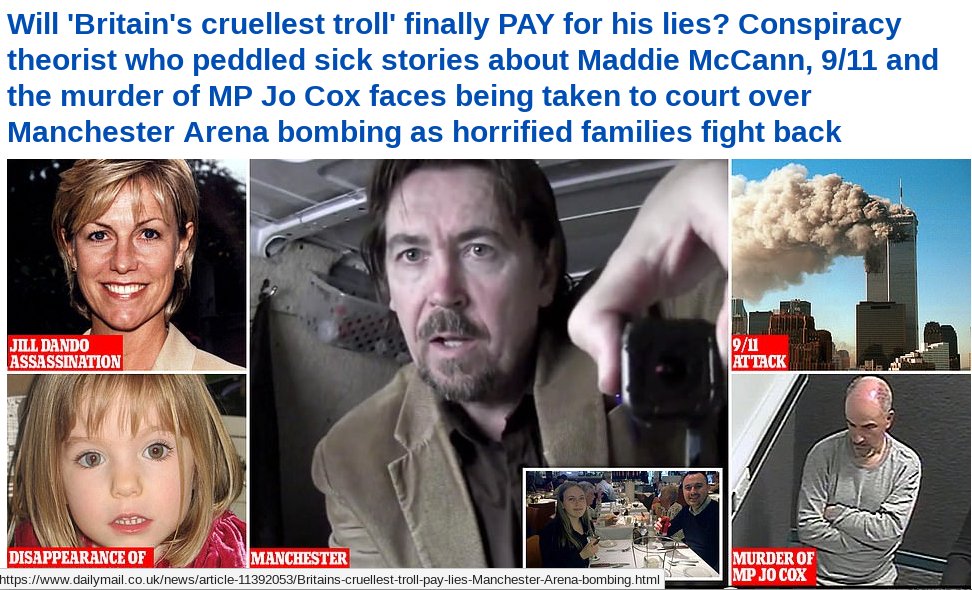