Staff member
Yes there is plenty of it but it has everything to do with powerful perverts and fuck all to do with gas....or Putin. Hunt (Careful) is spending £25M on patronising adverts telling people what they already know!

Britain never has imported (much) gas from Russia, we get under half from N. Sea and most of the rest from Norway. This Government (Under Truss) allegedly deliberately blew up both pipelines feeding gas to the EU, so that Putin can't sell much gas there. If the EU is buying gas from Norway leaving us short, then that's what we get for shooting ourselves in the foot. Or to put it another way for having an unelected government full of unqualified fools flapping around in the dark trying to do the dirty work of a Monarch's Pro Israeli blackmailers!

Only fools eg would encourage people to go out and buy electric cars at a time when there ain't no electricity to keep the lights on!

I mean, turn boiler temperature down equates to 'just freeze peasants and stop criticising us!' 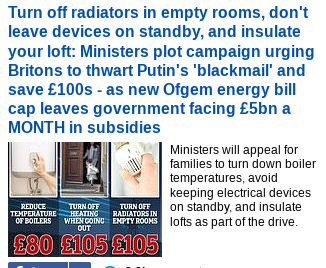